A 3-Dimensional View of a Star Cluster Volume Render

While I haven't yet progressed to the point of simulating my own globular clusters in FLASH (hopefully soon), I was fortunate enough to be supplied with a hdf5 checkpoint of a complex simulation so I could practice volume rendering in yt. This was supplied by Melinda Soares-Furtado, whose website can be found by clicking on her name. After getting the hang of volume rendering fairly quickly thanks to the fairly straightforward syntax of Python and the yt library, I decided to try my hand at creating a visualization that imparted a sense of depth. While yt has an experimental interactive volume renderer included at the time of this writing (more information about this can be found here), I wanted to try my hand at creating a gif, which doesn't need to be rendered in real time whenever I wanted to show it.

With some help from Melinda. who introduced me to some useful python commands that allowed me to name the files in an orderly manner, I was able to create a fairly pleasing visualization. I created the frames by using a for loop that created a volume render of the density data in the file, saved the image, and then rotated the camera around the center of the cluster by one degree. I had this repeat until each degree was rendered. From there, I compiled them into a sequence in Adobe Premiere and rendered a gif.

Unfortunately, the sigma_clip parameter, which increases the gamma value of the function to make the visualization easier to see, for the yt function show() seems to only apply to the image shown in the jupyter notebook file and not the file that is downloaded with the save() function. The original gif is shown below

With this visualization, it's fairly difficult to make out the cluster at all, and it isn't particularly useful. Thankfully, I was able to import it back into Adobe Premiere and make increase the saturation and gamma, along with some other color correction, to make the visualization much more intriguing

In the future, I hope to create a similar visualization that shows a simulation actually running as the camera rotates around the scene rather than capturing an instant in time. I think this would be very interesting, and it would undoubtedly be a way to increase my proficiency in using yt for data visualization and analysis. I also plan on investigating the issue of the more saturated render not being downloaded by yt, as it really wouldn't be practical to manually save each render preview instead of using the save() function. 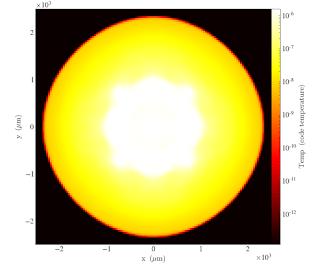 Creating a FLASH Site-Specific Makefile for the Dark Cluster

I can be reached at tylerpbarna@gmail.com or at tyler.barna@rutgers.edu. Feel free to reach out with any questions or if you need another means of contact.